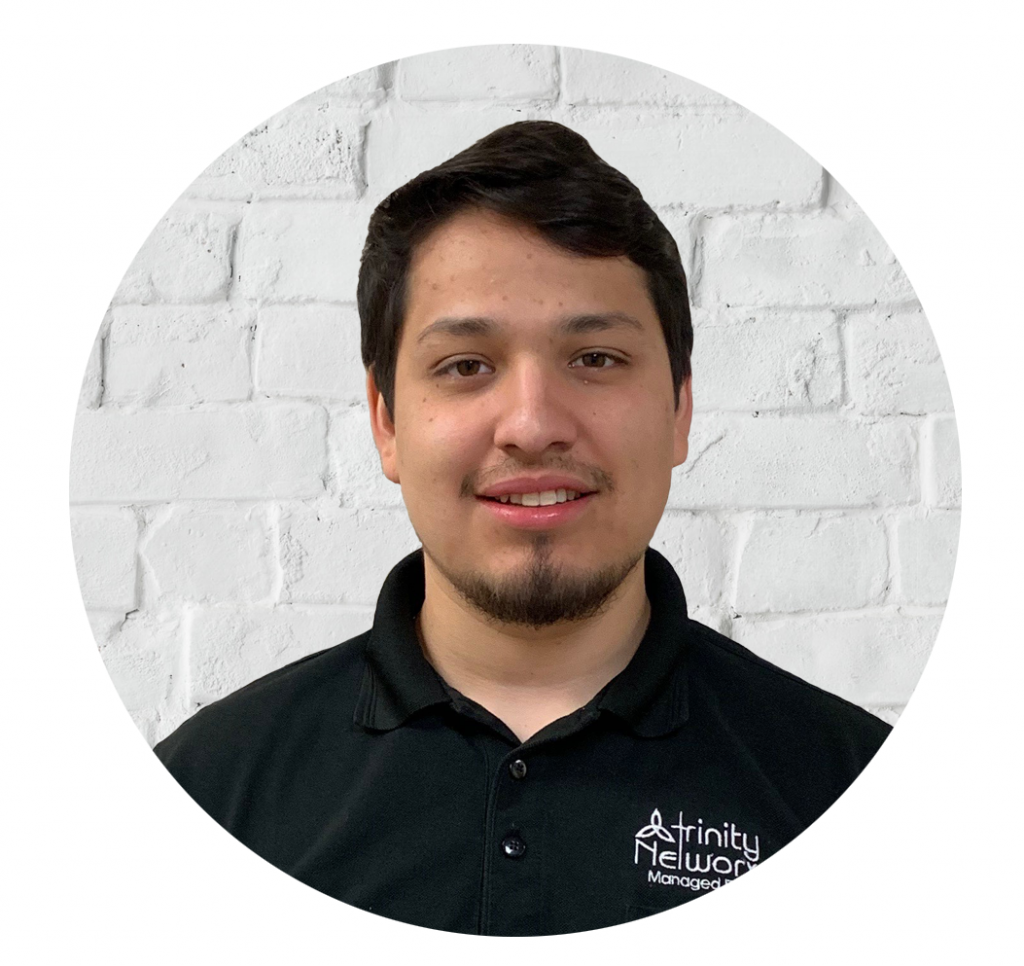 Jesse Dorado found a new love in his life when he was a senior in high school. After revolving his life around basketball earlier in his life, he fell in love with everything related to computers. Of course, he loves computer gaming, but even early in his love affair with technology he was building computers as a hobby. It turned into a side gig where he built and sold computers to people he knew.

He was curious about windows operating systems when he took courses in high school and became proficient. Soon he realized he could learn anything about the machine he had at home. When he joined the Trinity family his feeling of excitement and curiosity was sparked again.

Before he came to Trinity, he went to work for Samsung right out of high school. It was a good job, but nothing like he finds in his current position. He was somewhat lucky when Samsung had a major lay off. After a short time not working, he began looking for his next job. He met Lance over dinner and automatically wanted to be part of his team.

He tells how he can’t get over how great it is to be in the family environment at Trinity. As Chief Service Officer (CSO) the sense of family gives him the urge to come in every day and keep the same energy all day long. He admits this was not true when he worked for the bigger company. He will tell you Lance is firm, even strict in his expectations. Jesse likes the way he isn’t allowed to lollygag and waste time. It makes him feel part of the company goals to give it his all every day. It comes with being a member of the team.

In this very unique company, he sees future potential. At 27 years old, learning leadership is very attractive to him. He is driven to learn as much as his brain can hold when it comes to computers, leadership, and customer service.

His attitude comes to play when he is working with Trinity clients too. He recognizes most people don’t really like tech because it isn’t their passion. He takes time and patience to the task of serving the customers.

Jesse is rare for someone his age. Not only does he have ambition and is glad to work with a team of hard workers, but he also starts winding down when the sun sets. He tends to go to bed around 9pm at night. He schedules his gaming and limits it to two hours or less. He doesn’t care much for cars. In fact, he sold his last one because he lives less than two miles from the office. He wants to fix computers and other tech systems, but he doesn’t want to fix cars.

As part of his continuous self-improvement practice he engages in hobbies. The latest is learning to juggle. In the past, he learned how to play acoustic guitar. Getting guidance from Barry in sales helped when his fingers got painful before the calluses formed. He didn’t give up and continues to practice.

When asked about a memorable experience working with a Trinity client, he tells about an owner of a construction company that didn’t like email. Jesse gave him his number so the client could text him to create a ticket when needed. Sure, it takes him a little more time, but Jesse understands the Trinity team is there to meet the needs of the client. Allowing this client to avoid email was worth the extra effort.